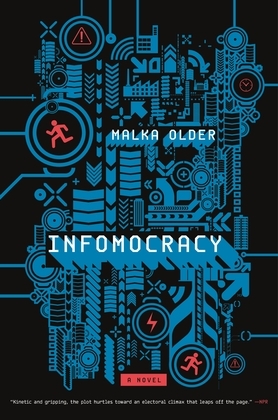 ? A Locus Award Finalist for Best First Novel
? The book The Huffington Post called "one of the greatest literary debuts in recent history"
? One of Kirkus' "Best Fiction of 2016"
? One of The Washington Post's "Best Science Fiction and Fantasy of 2016"
? One of Book Riot's "Best Books of 2016 So Far"

It's been twenty years and two election cycles since Information, a powerful search engine monopoly, pioneered the switch from warring nation-states to global micro-democracy. The corporate coalition party Heritage has won the last two elections. With another election on the horizon, the Supermajority is in tight contention, and everything's on the line.

With power comes corruption. For Ken, this is his chance to do right by the idealistic Policy1st party and get a steady job in the big leagues. For Domaine, the election represents another staging ground in his ongoing struggle against the pax democratica. For Mishima, a dangerous Information operative, the whole situation is a puzzle: how do you keep the wheels running on the biggest political experiment of all time, when so many have so much to gain?

?A fast-paced, post-cyberpunk political thriller... If you always wanted to put The West Wing in a particle accelerator with Snow Crash to see what would happen, read this book.? ?Max Gladstone, author of Last First Snow

"Smart, ambitious, bursting with provocative extrapolations, Infomocracy is the big-data-big-ideas-techno-analytical-microdemoglobal-post-everything political thriller we've been waiting for." ?Ken Liu, author of The Grace of Kings

"In the mid-21st century, your biggest threat isn?t Artificial Intelligence?it?s other people. Yet the passionate, partisan, political and ultimately fallible men and women fighting for their beliefs are also Infomocracy?s greatest hope. An inspiring book about what we frail humans could still achieve, if we learn to work together." ?Karl Schroeder, author of Lockstep and the Virga saga