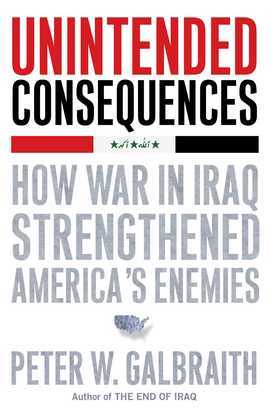 The Iraq war was intended to make the United States more secure, bring democracy to the Middle East, intimidate Iran and Syria, help win the war on terror, consolidate American world leadership, and entrench the Republican Party for decades. Instead,

Iraq: Galbraith challenges the assertion that the surge will lead to victory. By creating a Sunni army, the surge has, in fact, contributed to Iraq's breakup and set the stage for an intensified civil war between Sunnis and Shiites. If the United States wishes to escape the Iraq quagmire, it must face up to the reality that the country has broken up and cannot be put back together.

Iran: Having helped Iran's allies take control in Baghdad, the Bush administration no longer has a viable military option to stop Iran's nuclear program. Galbraith discusses how a president more pragmatic than Bush might get Iran to freeze its nuclear program as part of a package deal to upgrade relations between two countries equally threatened by Sunni extremism.

Turkey, Syria, and Israel: A war intended to make Israel more secure, undermine Syria's Assad regime, and strengthen ties with Turkey has had the opposite result.

Nationalism: In the coming decades, other countries may follow Iraq's example in fragmenting along ethnic and religious lines. Galbraith draws on his considerable experience in Iraq and the former Yugoslavia to predict where and what the United States might do about it.

The United States: George W. Bush substituted wishful thinking for strategy and as a result made America weaker. Galbraith provides some rules for a national strategy that will appeal equally to conservatives and liberals -- indeed, to anyone who believes the United States needs an effective national security strategy.