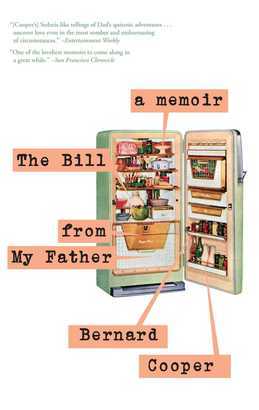 The Bill from My Father

Bernard Cooper's new memoir is searing, soulful, and filled with uncommon psychological nuance and laugh-out-loud humor. Like Tobias Wolff's This Boy's Life, Cooper's account of growing up and coming to terms with a bewildering father is a triumph of contemporary autobiography.

Edward Cooper is a hard man to know.Dour and exuberant by turns, his moods dictate the always uncertain climate of the Cooper household. Balding, octogenarian, and partial to a polyester jumpsuit, Edward Cooper makes an unlikely literary muse. But to his son he looms larger than life, an overwhelming and baffling presence.

As The Bill from My Father begins, Bernard and his father find themselves the last remaining members of the family that once included his mother, Lillian, and three older brothers. Now retired and living in a run-down trailer, Edward Cooper had once made a name for himself as a divorce attorney whose cases included "The Case of the Captive Bride" and "The Case of the Baking Newlywed," as they were dubbed by the Herald Examiner. An expert at "the dissolution of human relationships," the elder Cooper is slowly succumbing to dementia. As the author attempts, with his father's help, to forge a coherent picture of the Cooper family history, he discovers some peculiar documents involving lawsuits against other family members, and recalls a bill his father once sent him for the total cost of his upbringing, an itemized invoice adding up to 2 million dollars.

Edward's ambivalent regard for his son is the springboard from which this deeply intelligent memoir takes flight. By the time the author receives his inheritance (which includes a message his father taped to the underside of a safe deposit box), and sees the surprising epitaph inscribed on his father's headstone, The Bill from My Father has become a penetrating meditation on both monetary and emotional indebtedness, and on the mysterious nature of memory and love.