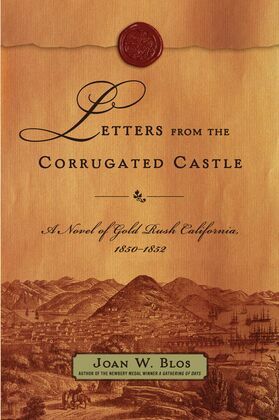 Letters from the Corrugated Castle

Dear Cousin Sallie,
I begin with words I never thought to write:
I am not an orphan!

Thirteen-year-old Eldora has always believed that her mother died when she was very little, and for nine years she has lived with people that she calls Aunt and Uncle. The year is 1850, and all three have exchanged their quiet lives in New Bedford, Massachusetts, for new ones in San Francisco, the rapidly growing city that is the heart of the California Gold Rush. Shortly after their arrival, they receive a letter from an unknown woman who believes she is Eldora's mother. She is eager to meet her long-lost daughter, and a visit is arranged. As Eldora deals with her conflicting feelings about this news, she must also adjust to the challenges -- and dangers -- of living in a brash and growing city. She finds herself teaching English to two Mexicano children and beginning to learn Spanish, and an unlikely friendship with a boy named Luke introduces her to the hard, sometimes humorous, and often violent world of the mining camps. Every day seems to bring something different and new to consider. But can Eldora discover where -- and to whom -- she belongs?

Told in letters that ring with the voice of the times, Letters from the Corrugated Castle is an intriguing adventure set in a fascinating time in California's history -- a worthy conclusion to the geographical trilogy begun with A Gathering of Days, winner of the Newbery Medal, and Brothers of the Heart.