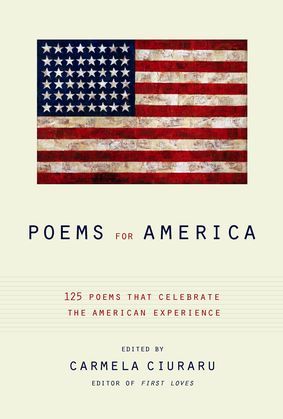 An inspiring anthology that celebrates our nation with more than one hundred of the greatest poems ever written about the landscapes, institutions, and transforming events of America.

This remarkable volume commemorates our country's struggles and triumphs with poems chronicling the American experience in all its vastness, from the late seventeenth century through the present day. Alongside poems about New York, Florida, and California are descriptions of railroads, amusement parks, hotels, and road trips; scenes of rural and western life; vivid descriptions of our grandest cities; and poems that illuminate the complexity of the most shameful chapters in U.S. history, such as slavery and the oppression of Native Americans. Taken together, these poems -- whether voices of celebration or dissent -- honor the astonishing and enduring spirit of our nation.

Here are classics such as "The Battle Hymn of the Republic," "Crossing Brooklyn Ferry," and "Paul Revere's Ride"; works by American masters, including Emily Dickinson, Robert Frost, Wallace Stevens, Marianne Moore, Langston Hughes, and Elizabeth Bishop; and lesser-known gems by important American writers, such as Ernest Hemingway's "I Like Americans" and Henry David Thoreau's "Our Country." Also featured are poems by contemporary talents, including Richard Wilbur, Philip Levine, Adrienne Rich, Yusef Komunyakaa, Rita Dove, and Sherman Alexie. A timeless volume that traces the history of the United States through verse, Poems for America is essential for poetry lovers and for anyone who appreciates the rich and fascinating story of our nation.