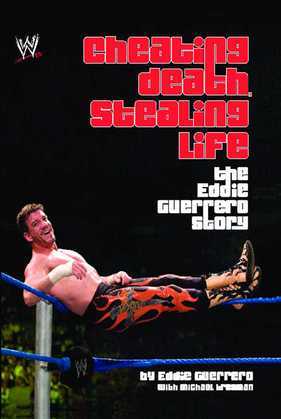 One of the most inspiring stories in wrestling history, Cheating Death, Stealing Life sees Eddie Guerrero recount his saga in remarkably candid fashion, chronicling a life of heartbreaks and painful personal struggles in frank, graphic detail.

Guerrero was born into Mexico's first family of sports entertainment, and his life story spans three generations of the wrestling business. His father, Gory Guerrero, was among the greatest legends of lucha libre--Mexican wrestling. Before Eddie was twenty, he was competing in the border town of Juarez, going on to work throughout Mexico. The family name made him an instant sensation but also cast a large shadow from which he would spend years trying to emerge. Paired with the late Art Barr, Guerrero cofounded what became the most hated--and popular--tag team in lucha libre, the infamous Los Gringos Locos.

Cheating Death, Stealing Life offers a no-holds-barred glimpse behind the curtain into the secret world of wrestling, from the harsh realities of a lifetime spent in hotels and rental cars, to the politics that permeate the dressing room. Of course, tight-knit friendships are also forged. Guerrero tells of his personal bonds with such Superstars as Chris Benoit and Dean Malenko.

It's also the story of Guerrero's private struggle, of a son caught in the shadow of a larger-than-life father and three older brothers, of a marriage that reached the brink of disintegration before being reborn as a more powerful and fulfilling relationship. Throughout, Eddie Guerrero pulls no punches describing his battles with self-doubt and inner darkness. In the end, Cheating Death, Stealing Life is a story of great courage and personal redemption, of Guerrero's bravery in facing his disease and fighting to become a better man in every light.