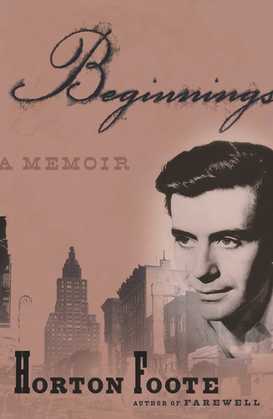 Since 1939, Horton Foote, "the Chekhov of the small town," has chronicled with compassion and acuity the experience of American life both intimate and universal. His adaptation of Harper Lee's To Kill a Mockingbird and his original screenplay Tender Mercies earned him Academy Awards. He has won a Pulitzer Prize, the Gold Medal for Drama from the American Academy of Arts and Letters, the PEN/Laura Pels Foundation Award for Drama, and the President's National Medal of Arts.
Beginnings is the story of Foote's discovery of his own vocation. He didn't always want to write. When he left Wharton, Texas, at the age of sixteen to study at the Pasadena Playhouse, Foote aspired to be an actor. He remembers the terror and excitement of leaving home during the Depression, his early exposure to the influences of German theater, and the speech lessons he took to "cure" him of his Southern drawl. He eventually arrives in New York to search for acting jobs and to study with some of the great Russian and American teachers of the 1930s. But after mixed results on the stage, he finally recognizes his true passion, writing.
From Martha Graham to Tennessee Williams, from Agnes de Mille to Lillian Gish, Horton collaborates with great artists in both dance and theater. The world he describes of fierce commitment and passion regardless of financial rewards is both captivating and inspiring. Through it all Horton maintains his genuine Southern charm, and he often travels home to Wharton, the town that nurtured him as a storyteller and has inspired his writing for the past sixty years. From one of the most moving and distinctive voices of our time, Beginnings is a rare, personal look at a fascinating era in American life, and at the making of a writer.