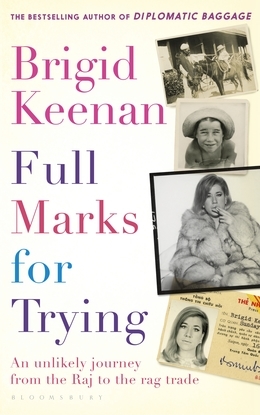 Brigid Keenan was never destined to lead a normal life. From her early beginnings Â? a colourful childhood in India brought to an abrupt end by independence and partition, then a return to dreary post-war England and on to a finishing school in Paris with daughters of presidents and princes Â? ordinary didn't seem to be her fate. When, as a ten-year-old, she overheard her mother describe her as 'desperately plain', she decided then and there that she had to rely on something different: glamour, eccentricity, character, a career Â? anything, so as not to end up at the bottom of the pile. And in classic Brigid style, she somehow ended up with them all.

Fate often gave Brigid a helping hand Â? in the late fifties, in her teens, she landed a job as an assistant at the Daily Express in London, and by the tender age of twenty-one she was a Fashion Editor at the Sunday Times. It was the dawn of the swinging sixties, and London was the place to be. Brigid worked with David Bailey and Jean Shrimpton, had her hair cut by Vidal Sassoon, drove around London in a mini-van, covered the Paris Collections and was labelled a 'Young Meteor' by the press. Despite always trying her hardest, Brigid's enthusiasm - and occasional naivete - could lead to embarrassing moments, such as when she turned up to report on the Vietnam war in a mini skirt Â?

Candid, wickedly funny and surprisingly touching, Full Marks for Trying is a coming-of-age memoir that will delight, entertain, and make you cry with laughter.