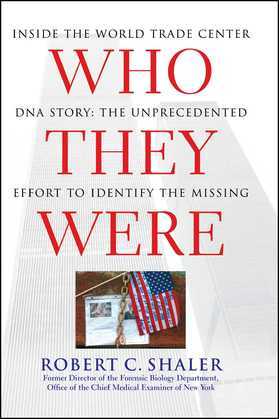 In Who They Were, Dr. Robert C. Shaler, the man who directed the largest and most groundbreaking forensic DNA investigation in U.S. history, tells with poignant clarity and refreshing honesty the story behind the relentless effort to identify the 2,749 victims of the attacks on the World Trade Center.
No part of the investigation into the 9/11 attacks has taken as long or been less discussed than the daunting task of identifying the victims -- and the hijackers -- from the remains in the rubble of Ground Zero. In Who They Were, Dr. Robert C. Shaler, former director of the Forensic Biology Department at the New York City Office of the Chief Medical Examiner, tells the inside story of the relentless process of DNA identification and depicts the victories and frustrations that he and his team of scientists experienced during more than three years of grueling work.
On September 11, 2001, New York City was unprepared for the mass-fatality event that occurred at the World Trade Center. The Office of the Chief Medical Examiner had to completely reconfigure itself to process and identify the nearly 20,000 remains that would eventually come through its doors. Facing an astonishing array of obstacles -- from political infighting and an overwhelming bureaucracy to the nearly insurmountable task of corralling personnel and supplies to handle the work -- Shaler and his team quickly established an unprecedented network of cooperation among public agencies and private labs doing cutting-edge research.
More than a story of innovative science at the frontiers of human knowledge, Who They Were also tells the very human story of how Dr. Shaler and his staff forged important and lasting bonds with the families of those who were lost. He shares the agony of mistakes made in the chaos and unintended misidentifications resulting in the excruciating difficulty of having to retrieve remains from families of the lost.
Finally, Dr. Shaler shares how he and the dedicated team of scientists who gave up more than three years of their lives when the rest of the world had moved on had to face the limits of science in dealing with the appalling level of destruction at Ground Zero and concede that no more victims would be sent home to their families. As of April 2005, when the process was suspended, only 1,592 out of the 2,749 who died on that fateful day had been identified.
With compelling prose and insight, Who They Were reveals the previously untold stories of the scientists determined to bring closure to devastated families in the wake of America's largest disaster.