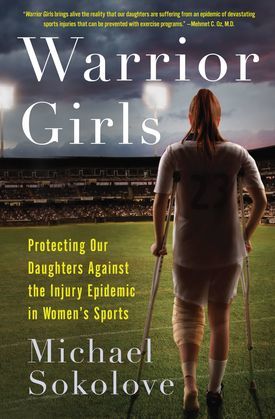 Amy Steadman was destined to become one of the great women's soccer players of her generation. "The best of the best," Parade magazine called her as she left high school and headed off to the University of North Carolina. Instead, by age twenty, Amy had undergone five surgeries on her right knee. She had to give up the sport she loved. She walked with a stiff gait, like an elderly woman, and found it painful to get out of bed in the morning.

Warrior Girls exposes the downside of the women's sports revolution that has evolved since Title IX: an injury epidemic that is easily ignored because we worry that it will threaten our daughters' hard-won opportunities on the field. From teenage girls playing local soccer, basketball, lacrosse, volleyball, and other sports to women competing at the elite level, female athletes are suffering serious injuries at alarming rates.

The numbers are frightening and irrefutable. Young female athletes tear their ACLs, the stabilizing ligament in the knee, at rates as high as eight times greater than their male counterparts. Women's collegiate soccer players suffer concussions at the same rate as college football players. From head to toe, female athletes suffer higher rates of injury, and many of them play through constant pain.

Michael Sokolove gives us the most up-to-date research on girls and sports injuries. He takes us into the homes and hearts of female athletes, into operating theaters where orthopedic surgeons reconstruct shredded knees, and onto the practice field of famed University of North Carolina soccer coach Anson Dorrance.

Exhaustively researched and strongly argued, Warrior Girls is an urgent wake-up call for parents and coaches. Sokolove connects the culture of youth sports -- the demands for girls to specialize in a single sport by age ten or younger, and to play it year-round -- directly to the injury epidemic. Devoted to the ideal of team, and deeply bonded with teammates, these tough girls don't want to leave the field even when confronted with serious injury and chronic pain.

Warrior Girls shows how girls can train better and smarter to decrease their risks. It makes clear that parents must come together and demand changes to a sports culture that manufactures injuries. Well-documented, opinionated, and controversial, Warrior Girls shows that all girls can safeguard themselves on the field without sacrificing their hard-won right to be there.