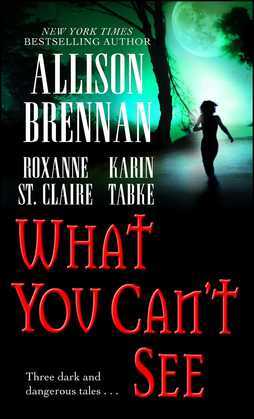 What You Can't See

Demonologist Anthony Zaccardi can't save the twelve priests brutally slaughtered at a California mission, but he's determined to send the killer -- an ancient demon -- back to hell. And when tough, sexy local sheriff Skye McPherson refuses to believe something supernatural is at work, Anthony realizes that to "Deliver Us From Evil" he must first win Skye's trust, then her heart.

Popular TV psychic Arianna Killian's conversations with the dead have earned her the attention of a killer who fears her abilities, and Bullet Catcher Chase Ryker is the skeptical bodyguard assigned to protect her. æWhen the messages turn deadly, they are given a "Reason to Believe" in life after death...and love...after all.

After a fatal car crash, bad boy cop Zach Garret's descent into hell is interrupted by an unusual deal for "Redemption." All Zach has to do is return to earth as a warrior sworn to defend his ex-fianc?e Danica Keller, the unknowing keeper of a power coveted by the forces of darkness. But even harder than keeping Danica alive that long is convincing her to give a second chance to the man who once betrayed her.