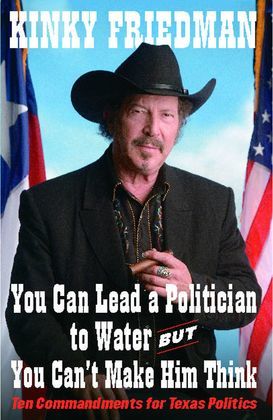 You Can Lead a Politician to Water, But You Can't Make Him Think

And Kinky Said Unto the People: Why the Hell Not?

So the good people of Texas weren't able to get the Kinkster into the Governor's Mansion in 2006. It was a solid race, and he fought the good fight. Getting on the ballot as an independent -- a feat that had not been achieved in over a century -- was a victory in itself. And with ideas like "slots for tots" (legalized gambling to pay for education), the five Mexican generals plan (bribes to enforce border protection), and a firm stand against the "wussification" of the state, he would have done a helluva job.

If that 2006 election was any indication -- and it was -- the political landscape in both Texas and the country at large needs a significant overhaul. The hucksters, the wealthy, and the twofaced rule; there is no room for Truth, and the little guys are quickly forgotten in all the muck. But Kinky, (briefly) down yet certainly not out, is still looking out for his fellow Americans, and he has much wisdom to impart.

In this hilarious, thought-provoking manifesto, Kinky lays forth his ten commandments for improving the state of Texas and politics everywhere, and for restoring order, logic, decency, and above all a sense of humor back to this country. It's classic Kinky in a brand new way. And he might just have a point.