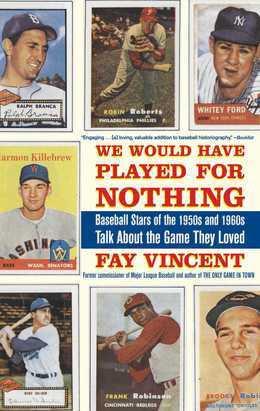 We Would Have Played for Nothing

Former Major League Baseball commissioner Fay Vincent brings together a stellar roster of ballplayers from the 1950s and 1960s in this wonderful new history of the game. These were the decades when baseball expanded across the country and truly became the national pastime. The era opened, though, with the domination of the New York teams: the Yankees, Dodgers, or Giants were in every World Series of the 1950s -- but by the end of the decade the two National League teams had moved to California.

Representing those great teams in this volume are Whitey Ford, Ralph Branca, Carl Erskine, Duke Snider, and Bill Rigney. They recall the great 1951 Dodgers-Giants playoff that ended with Bobby Thomson's famous home run (served up by Branca). They remember the mighty Yankees, defeated at last in 1955 by the Dodgers, only to recover the World Series crown from their Brooklyn rivals a year later. They talk about their most feared opponents and most valued teammates, from Joe DiMaggio and Mickey Mantle to Jackie Robinson and Roy Campanella to Willie Mays.

But there were great teams and great ballplayers elsewhere in the 1950s and 1960s. Hall of Fame pitcher Robin Roberts recalls the famous Whiz Kids Phillies of 1950 and his epic duels with Don Newcombe and other leading National League pitchers. Lew Burdette remembers his years as one-half of the dominating pitching duo (with Warren Spahn) that propelled the Braves to the World Series in 1957 and 1958.

Harmon Killebrew recalls belting home runs for the hapless Washington Senators, then discovering a new world of enthusiastic fans in Minnesota when the Senators joined the westward migration and became the Twins. Brooks Robinson, on the other hand, played his entire twenty-three-year career for the Baltimore Orioles, never moving anywhere except all around third base, where he earned a record sixteen consecutive Gold Gloves. When Frank Robinson left Cincinnati to join Brooks on the Orioles in 1966, that team became a powerhouse. Frank Robinson won the MVP award that year, the first player to do so in each league. He remembers taking the momentous step to become the first African-American manager in the big leagues, the final step that Jackie Robinson had wanted to take. Like Frank Robinson, Billy Williams was one of the first African-American stars not to come out of the old Negro Leagues. He spent his greatest years with the Chicago Cubs, playing alongside Mr. Cub, Ernie Banks, and later Ron Santo, but here he recalls how he nearly gave up on the game in the minor leagues.

We Would Have Played for Nothing is full of fascinating stories about how these great ballplayers broke into baseball, about the inevitable frustrations of trying to negotiate a contract with owners who always had the upper hand, and about great games and great stars-teammates and opponents-whose influence shaped these ballplayers' lives forever.

Illustrated throughout, this book is a wonderful reminiscence of two great decades in the history of baseball.