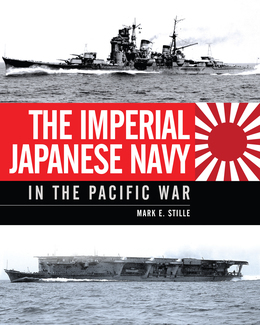 The Imperial Japanese Navy in the Pacific War

The Imperial Japanese Navy (IJN) was the third most powerful navy in the world at the start of World War II, and came to dominate the Pacific in the early months of the war. This was a remarkable turnaround for a navy that only began to modernize in 1868, although defeats inflicted on the Russians and Chinese in successive wars at the turn of the century gave a sense of the threat the IJN was to pose. Bringing together for the first time material previously published in Osprey series books, and with the addition of new writing making use of the most recent research, this book details the Japanese ships which fought in the Pacific and examines the principles on which they were designed, how they were armed, when and where they were deployed and how effective they were in battle. A valuable reference source for Pacific War enthusiasts and historians, The Imperial Japanese Navy in the Pacific War provides a history of the IJN's deployment and engagements, analysis of the evolution of strategy and tactics, and finally addresses the question of whether it truly was a modern navy, fully prepared for the rigors of combat in the Pacific.