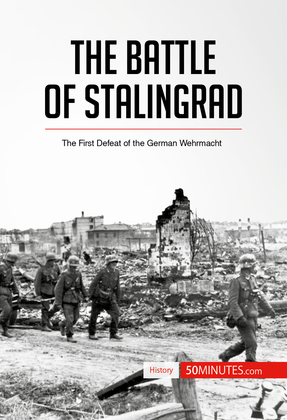 The Battle of Stalingrad

Keen to learn but short on time? Get to grips with the events of the Battle of Stalingrad in next to no time with this concise guide.

50Minutes.com provides a clear and engaging analysis of the Battle of Stalingrad. In August 1942, three years after the start of the Second World War, Nazi Germany and its allies launched a brutal attack on the Russian city of Stalingrad. However, after months of heavy fighting and extraordinary resistance from the Soviets, the Germans were forced to withdraw. Hitler's army was significantly weakened after this battle, one of the deadliest in history, and never regained the upper hand in the East.

In just 50 minutes you will:
oUnderstand the background to the battle and Germany's reasons for launching an attack on the USSR
oIdentify the main commanders and leaders on both sides, and their strategic decisions during the battle
oAnalyse the impact of the battle and its contribution to the downfall of Nazi Germany