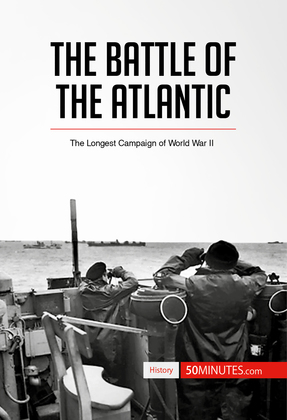 The Battle of the Atlantic

Keen to learn but short on time? Get to grips with the events of the Battle of the Atlantic in next to no time with this concise guide.

50Minutes.com provides a clear and engaging analysis of the Battle of the Atlantic. At 9pm on 3 September 1939, the longest campaign of the Second World War began. Germany aimed to use its navy and air force to gain supremacy in the Atlantic Ocean and prevent the British from receiving aid, thereby forcing them to surrender. However, the Germans did not foresee the power of the Allied forces, who mobilised extraordinary means to succeed in the liberation of occupied Europe.

In just 50 minutes you will:
oUnderstand the events leading up to the battle and the significance of naval warfare during the Second World War
oIdentify the main commanders and leaders on both sides
oAnalyse the outcome of the battle and its contribution to the defeat of Germany in 1945