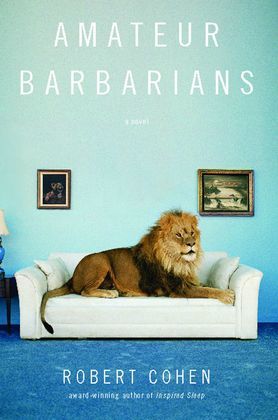 Acclaimed, award-winning novelist Robert Cohen delivers a bold, provocative exploration of the panic of midlife, following two men plateaued on either side of their forties and the unexpected consequences of changing course.

Teddy Hastings is a New England middle school principal desperate for transcendence. Unmoored by his brother’s death and a health scare of his own, he tries to broaden his ordinary life and winds up unemployed and on the wrong side of the law. Meanwhile, Oren Pierce, a perpetual grad student from New York, abandons, somewhat to his own surprise, his search for the extraordinary and begins settling into the humble existence that Teddy seeks to escape. What comforts Oren alarms Teddy, and their paths overlap as Teddy’s quest for the unknown and unfamiliar experience takes him on a rash trip to Africa, leaving Oren to assume the trappings of his life, including Teddy’s wife Gail.

Amateur Barbarians showcases a writer at the peak of his powers, tracing domestic ambivalence, the comic perils of introspection and desire, and the terror of an unlived life with Cohen’s signature wit and uncanny perception, proving yet again why he was touted by The New York Times Book Review as the “heir to Saul Bellow and Philip Roth.”