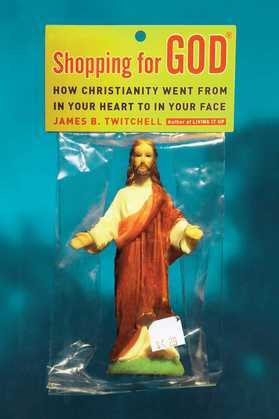 Not so long ago religion was a personal matter that was seldom discussed in public. No longer. Today religion is everywhere, from books to movies to television to the internet-to say nothing about politics. Now religion is marketed and advertised like any other product or service. How did this happen? And what does it mean for religion and for our culture?

Just as we shop for goods and services, we shop for church. A couple of generations ago Americans remained in the faith they were born into. Today, many Americans change their denomination or religion, sometimes several times. Churches that know how to appeal to those shopping for God are thriving. Think megachurches. Churches that don't know how to do this or don't bother are fading away. Think mainline Protestant churches.

Religion is now celebrated and shown off like a fashion accessory. We can wear our religious affiliation like a designer logo. But, says James Twitchell, this isn't because Americans are undergoing another Great Awakening; rather, it's a sign that religion providers-that is, churches-have learned how to market themselves. There is more competition among churches than ever in our history. Filling the pew is an exercise in salesmanship, and as with any marketing campaign, it requires establishing a brand identity. Successful pastors ("pastorpreneurs," Twitchell calls them) know how to speak the language of Madison Avenue as well as the language of the Bible.

In this witty, engaging book, Twitchell describes his own experiences trying out different churches to discover who knows how to "do church" well. He takes readers into the land of karaoke Christianity, where old-style contemplative sedate religion has been transformed into a public, interactive event with giant-screen televisions, generic iconography (when there is any at all), and ample parking.

Rarely has America's religious culture been examined so perceptively and so entertainingly. Shopping for God does for religion what Fast Food Nation has done for food.