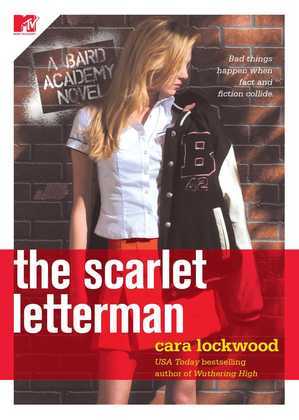 Miranda Tate and her closest friends have been let in on a powerful secret: their teachers are famous dead writers.

After a heroic first semester, Miranda's got Bard Academy's ghost faculty in her debt, a new boyfriend in hot basketball player Ryan Kent, and she's just turned in a paper about The Scarlet Letter that she's sure is A material. But when the Bard Queen Bee, Parker Rodham, claims she's attacked in the woods, Ryan is all too happy to play bodyguard. Then teachers start disappearing and the campus is abuzz with news of the Hooded Sweatshirt Stalker -- not to mention sightings of a monster in the woods. But it's Miranda who feels like a moving target when she is accused not only of plagiarism but of suspicious involvement in the attacks!

Meanwhile, rumors are flying about what it really means that Miranda's wearing Ryan's varsity letterman jacket. And she just can't shake her nagging feelings for Heathcliff, who entrusted her with the locket that keeps him in the "real" world even though every one else thinks he's back where he belongs, in the pages of Wuthering Heights. Is he the campus stalker? Does she like him more than she likes Ryan? And how is that possible if he's only a character from a book?