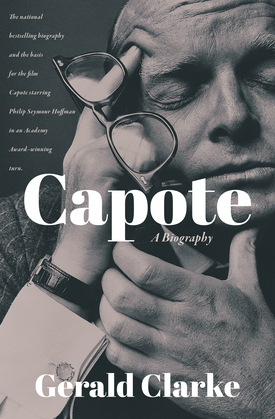 by Gerald Clarke (Author)
Excerpt
Nonfiction Biography & autobiography Entertainment & performing arts Literary
warning_amber
One or more licenses for this book have been acquired by your organisation details
EPUB
Unlimited loans, One at a time
Details
The national bestselling biography and the basis for the film Capote starring Philip Seymour Hoffman in an Academy Award–winning turn.

One of the strongest fiction writers of his generation, Truman Capote became a literary star while still in his teens. His most phenomenal successes include Breakfast at Tiffany’s, In Cold Blood, and Other Voices, Other Rooms. Even while his literary achievements were setting the standards that other fiction and nonfiction writers would follow for generations, Capote descended into a spiral of self-destruction and despair.

This biography by Gerald Clarke was first published in 1988—just four years after Capote’s death. In it, Clarke paints a vivid behind-the-scenes picture of the author’s life—based on hundreds of hours of in-depth interviews with the man himself and the people close to him. From the glittering heights of notoriety and parties with the rich and famous to his later struggles with addiction, Capote emerges as a richly multidimensional person—both brilliant and flawed.

“A book of extraordinary substance, a study rich in intelligence and compassion . . . To read Capote is to have the sense that someone has put together all the important pieces of this consummate artist’s life, has given everything its due emphasis, and comprehended its ultimate meaning.” —Bruce Bawer, The Wall Street Journal