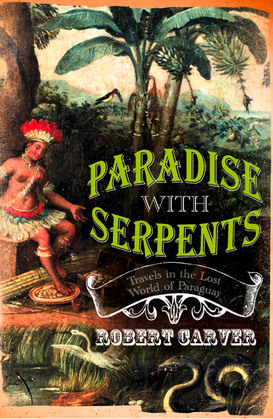 Paradise With Serpents: Travels in the Lost World of Paraguay (Text Only)

Robert Carver, journalist and author of the acclaimed ‘Among the Mountains’, searches for high adventure and intense experiences as he follows the trail of a family mystery .

Once upon a time when Buenos Aires was still a tiny village, there existed an almost magical sub-tropical paradise in the lost heart of South America – Old Paraguay. In 1537 a group of Europeans founded Asuncion on the banks of the Parana river, where they were enthusiastically welcomed by the Gurani. An extraordinary fusion of New World and Old was created – a place where magnificent baroque cathedrals were built of carved stone in the heart of the jungle and solemn Catholic masses and high oratorios were sung and performed on European instruments by Gurani Indians and their Jesuit mentors. But every paradise has its serpents and the history of Paraguay is also studded with oppressive and even demented dictators.

Robert Carver’s long-term fascination with this intoxicating world was fuelled by childhood stories of his great-uncle Charlie Carver, who vanished into the Amazonian jungle of old north Paraguay in search of Inca silver. He never returned, but his smashed gold pocket watch was traded down river and returned to the family in England.

Today Paraguay is the only South American country which is truly bilingual, in Spanish and Gurani: here everyone is a mestizo and proud of their dual heritage. Pink, freshwater dolphins play in the rivers of the Huan Chaco while in the forests soldier-ants cut paths six feet wide and eat anything in their way – they can devour a nylon tent in an hour.

Carver (a fluent Spanish-speaker) travels into this forbidden lost world in search of his own golden city of outlandish experience. The physically reckless journey takes him from mule trains high in frozen mountains to steamers up remote rivers in dense tropical jungle and he faces the threat of malaria, dengue fever and the odd marauding outlaw.