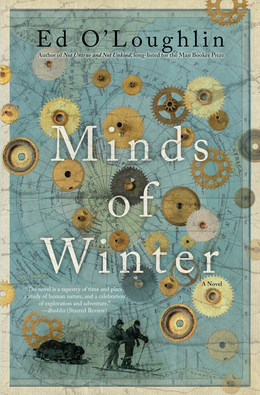 When history looks through the annals of polar exploration, it is sure to deem Sir John Franklin's 1845 campaign in search of the Northwest Passage as the darkest chapter. All 129 men would be lost to the ice; and nothing retrieved from an inventory that included two Greenwich chronometers given to the expedition.

When historians analyze the most profound mysteries of the modern age, they therefore remain mystified as to just how one of those very same timepieces would reappear in London - crudely disguised as a Victorian carriage clock -over a century and a half after being recorded as lost in the famous disaster.
It is a real-life mystery that did, and still continues to, defy an explanation.
When Nelson Nilsson catches the eye of the lone female in the arrivals hall of Inuvik airport in the Northern Territories of Canada, the last thing his life needs is further complication. Still unable to comprehend the enigmatic obsession that led his brother to take his own life, Nelson just wants to get in his care and drive.
When travel-weary Fay Morgan looks up and mistakes Nelson for a taxi driver, she realizes for the first time that she has finally made it to the one place on earth that may hold the answer to her burning question. And when she capitalizes on Nelson's good nature and obtains a lift, she feels fate is on her side.
It is an improbable meeting that will unearth an impossible connection: as the questions Nelson has about his present, and those Fay has about her past, share a common link -itself inextricably tied to the movements of an elusive timepiece.