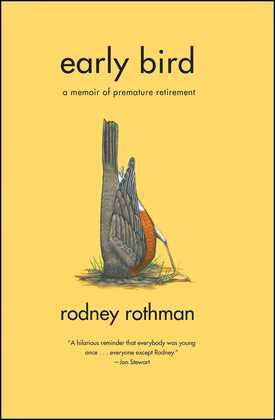 Everyone says they would like to retire early, but Rodney Rothman actually did it -- forty years early. Burnt out, he decides at the age of twenty-eight to get an early start on his golden years. He travels to Boca Raton, Florida, where he moves in with an elderly piano teacher at Century Village, a retirement village that is home to thousands of senior citizens.
Early Bird is an irreverent, hilarious, and ultimately warmhearted account of Rodney's journey deep into the heart of retirement. Rodney struggles for acceptance from the senior citizens he shares a swimming pool with, and battles with cranky octogenarians who want him off their turf. The day-to-day dealings begin to wear on him. Before long he observes, "I don't think Tuesdays with Morrie would have been quite so uplifting if that guy had to spend more than one day a week with Morrie."
Rodney throws himself into the spirit of retirement, fashioning a busy schedule of suntanning, shuffleboard, and gambling cruises. As the months pass, his neighbors seem to forget that he is fifty years younger than they are. He finds himself the potential romantic interest of an aging femme fatale. He joins a senior softball club and is disturbed to learn that he is the worst player on the team. For excitement he rides along with a volunteer police officer on his patrols, hunting for crime. But even the criminals in his community seem to have retired.
Early Bird is a funny, insightful, and moving look at what happens to us when we retire, viewed from a remarkably premature perspective. Any reader who plans on becoming an old person will enjoy joining Rodney on his strange journey, as he reconsiders his notions of romance, family, friendship, and ultimately, whether he's ever going back to work.