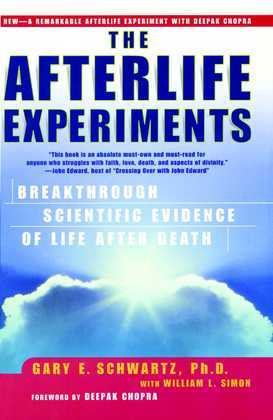 An esteemed scientist's personal journey from skepticism to wonder and awe provides astonishing answers to a timeless question: Is there life after death?
Are love and life eternal? This exciting account presents provocative evidence that could upset everything that science has ever taught. Daring to risk his worldwide academic reputation, Dr. Gary E. Schwartz, along with his research partner Dr. Linda Russek, asked some of the most prominent mediums in America -- including John Edward, Suzane Northrup, and George Anderson -- to become part of a series of extraordinary experiments to prove, or disprove, the existence of an afterlife.
THE AFTERLIFE EXPERIMENTS
This riveting narrative, with its electrifying transcripts, puts the reader on the scene of a breakthrough scientific achievement: contact with the beyond under controlled laboratory conditions. In stringently monitored experiments, leading mediums attempted to contact dead friends and relatives of "sitters" who were masked from view and never spoke, depriving the mediums of any cues. The messages that came through stunned sitters and researchers alike.
Here, as they unfolded in the laboratory setting, are uncanny revelations about a son's suicide, what a deceased father wanted to say about his last days in a coma, the transformation of a man's lifelong doubts about the afterlife, and, most amazing of all, a forecast of a beloved spouse's death. Dr. Schwartz was forced by the overwhelmingly positive data to abandon his skepticism, reaching some startling conclusions.
Compelling from the first page to the last, The Afterlife Experiments is the amazing documentation of groundbreaking experiments you will never forget.