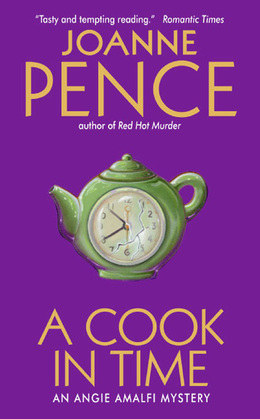 A Cook in Time

In this 7th delightful culinary mystery from Joanne Pence, dilettante chef Angie Amalfi gets entangled with a group of UFO–chasers and government conspiracy nuts, while trying to get her new business off the ground.

Always thinking of new and better business ideas, culinary queen Angie Amalfi is sure she's got a winner with "Fantasy Dinners," one–of–a–kind thematic feasts specifically created to suit a client's unique tastes. Unfortunately no one's biting except the Prometheus Group, a crackpot cadre of UFO–chasers and conspiracy geeks. Still, even a wacko customer's better than none, and designing an otherworldly repast should keep Angie busy while her overworked policeman beau Paavo investigates a series of bizarre murders.

But the more time she spends dealing with these alien abduction enthusiasts, the more Angie believes that maybe there is some kind of conspiracy afoot and that the Prometheans and Paavo's cases are somehow connected––which is inspiring just the kind of unhealthy curiosity that could end up launching Angie out of this world...for good!