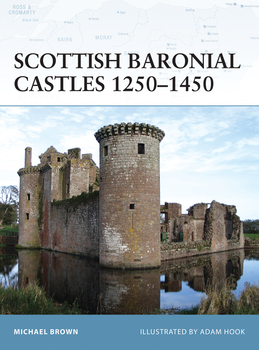 Devastated by the civil wars of the 17th century or by the neglect of their owners, the majority of Scottish baronial castles built between 1250 and 1450 survive as little more than skeletal ruins. These reminders of Scotland's past have captured the imaginations of romantics, artists, writers and tourists since the late 18th century. Often set in spectacular surroundings, on cliff-tops, islands, and gorges, their ruined grandeur evokes a medieval world of sieges, banquets and murders, and provides a rare physical link with the Anglo-Scottish wars of Robert the Bruce and William Wallace.