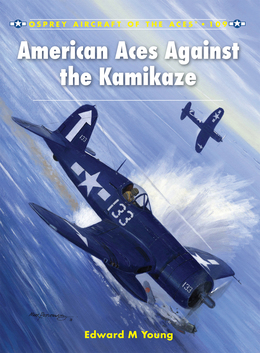 American Aces against the Kamikaze

The Japanese High Command realised that the loss of Okinawa would give the Americans a base for the invasion of Japan. Its desperate response was to unleash the full force of the Special Attack Units, known in the west as the Kamikaze ('Divine Wind'). In a series of mass attacks in between April and June 1945, more than 900 Kamikaze aeroplanes were shot down. Conventional fighters and bombers accompanied the Special Attack Units as escorts, and to add their own weight to the attacks on the US fleet. In the air battles leading up to the invasion of Okinawa, as well as those that raged over the island in the three months that followed, the Japanese lost more than 7,000 aircraft both in the air and on the ground. In the course of the fighting, 67 Navy, 21 Marine, and three USAAF pilots became aces. In many ways it was an uneven combat and on numerous occasions following these uneven contests, American fighter pilots would return from combat having shot down up to six Japanese aeroplanes during a single mission.