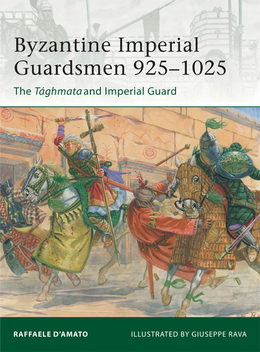 The hundred-year period ending in 1025, from the reign of the Emperor Constantine VII to that of Basil II 'the Bulgar-Slayer', encompassed the last great era of Byzantine aggression and dominance in the Near East and Balkans. During that time, a succession of soldier-emperors hallenged and defeated an array of opponents on land and at sea and reconquered vast swathes of territory. At the heart of the Emperors' forces were the professional, highly mobile Tagmata or Imperial Guard regiments, originally formed to guard the EmperorÂ¹s person in the capital but invariably deployed as elite combat troops. Joining these heavy cavalry units, were a variety of exotic mercenary units recruited from foreigners, notably the legendary Varangians. Featuring specially commissioned full-colour artwork, this lively study sheds new light on the colourful regiments of the Byzantine Imperial Guard, the formidable warriors who provided the Byzantine emperors with an insurance policy in the capital, and the elite of their field armies when on campaign.