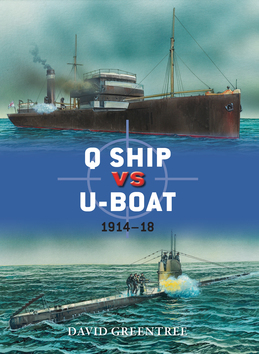 Q ships came in all shapes and sizes Â? coastal steamer, trawler, barque, yacht or schooner Â? but all had to look harmless in order to lure their opponents to the surface and encourage them to attack. Armaments differed according to ship size; steamers commonly had 4in guns mounted amidships and in the bow, trawlers 3-pdrs and sailing ships 12-pdrs. Those who served on Q ships had to accept that their U-boat opponents would be able to strike first. Q ship captains kept ready a 'panic crew', which was trained to act out an elaborate evacuation to convince the U-boat commander that the ship was being abandoned by its crew. The Q ship captain would remain behind with a handful of other crewmen manning the guns, which remained hidden until the most opportune time to unmask and engage the U-boat. The Q ship concept had emerged early in the war when no other method seemed likely to counter the U-boat threat, and flourished until new technologies and tactics were developed, tested and implemented.