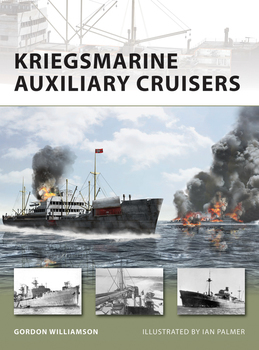 Despite being relatively unknown compared to famous ships like Graf Spee or Bismarke, or the more famous U-boats, the Auxiliary Cruisers were immensely successful, not only in the number of enemy ships they sank, but in the resources which were tied up trying to track them down. The Royal Navy's auxiliary cruisers tended to be merchant vessels used to protect convoys from attack. The German Auxiliary Cruisers, however, heavily armed and usually carried torpedo tubes as well as guns and even sometimes their own aircraft. These ships were aggressive predators, searching the sea lanes for unsuspecting enemy merchants, and were not only capable of destroying enemy merchant ships, but also of defending themselves against well-armed enemy warships. This book looks at the specifications and designs of the 11 Auxiliary Cruisers, as well as their combat histories, their eventual fates, and the careers of some of the most famous commanders.