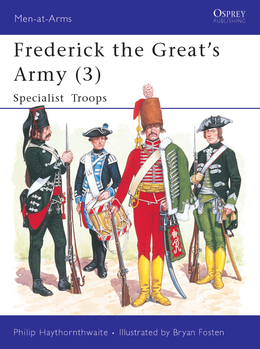 Frederick the Great was not renowned as a great artillery enthusiast, however he did recognise the importance of artillery and greatly expanded the arm. Frederick was also aware of the value of strong fortifications as barriers against the manoeuvres of enemy armies, and as places of security for troops and magazines; some of these were of vital significance in the survival of Prussia during the Seven Years' War. This fascinating volume by Philip Haythornwaite examines the artillery, engineers and others specialist troops of Frederick the Great's army.