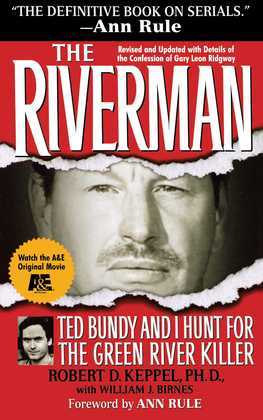 After a search of over twenty years, one of America's most elusive serial killers was finally apprehended. Now, read the true story of one man's attempt to get inside se mind of the Green River Killer

July 15, 1982: 3 woman's strangled body was filed, caught on the pilings of Washington state's Green River. Before long, the "Green River Killer" would be suspected in at least forty-nine more homicides, with no end in sight. Then the authorities received an unbelievable letter from the infamous serial killer Ted Bundy -- then on Florida's death row -- offering to help catch the Green River Killer. But he would only talk to one man: Robert Keppel, the former homicide detective who had helped track Bundy's cross-county killing spree.

Now these conversations are revealed, in which Bundy speculates about the motive and methods of the Green River Killer -- and reveals his own twisted secrets as well. Now, as never before, we look into the face of evil...and into the heart of a killer.