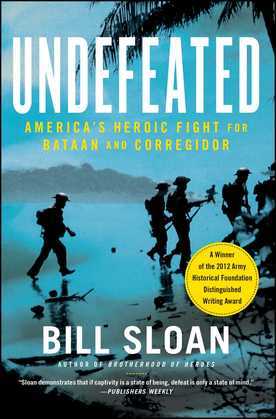 Based on exclusive interviews with more than thirty survivors, Undefeated tells the courageous story of the outnumbered American soldiers and airmen who stood against invading Japanese forces in the Philippines at the beginning of World War II, and continued to resist through three harrowing years as POWs.

Bill Sloan, "a master of the combat narrative" (Dallas Morning News), captures the valor, fortitude, and agony of the American defenders of the Philippines. Abandoned by their government, the men and women of the U.S. garrison battled hopeless military odds, rampant disease, and slow starvation to delay the inevitable surrender of the largest American military force ever. For four months they fought toe to toe against overwhelming enemy numbers--and forced the Japanese to pay a heavy cost in blood for every inch of ground they gained on the Bataan peninsula. After the surrender came the infamous Bataan Death March, where up to eighteen thousand American and Filipino prisoners died or were murdered as they marched sixty-five miles under the most hellish conditions imaginable.

Rather than picturing these defenders as little more than helpless victims of a powerful and sadistic enemy--as have most previous books about the Philippine campaign--Undefeated tells the full story of the remarkable courage and indomitable will that cost the Japanese invaders thousands of casualties on Bataan and Corregidor. Interwoven throughout this gripping narrative are the harrowing personal experiences of dozens of American soldiers, airmen, and Marines. Sloan also provides vivid portraits of the officers who led the American forces, such as General Douglas MacArthur, who escaped to Australia as the situation on Bataan worsened, and General Jonathan Wainwright, who succeeded him as top U.S. commander in the Philippines and himself became a prisoner of the Japanese.

Undefeated chronicles one of the great sagas of World War II--and celebrates a resounding triumph of the human spirit.