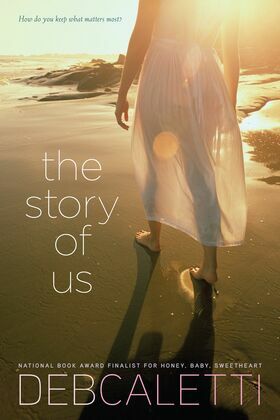 The Story of Us

A week of her mother’s wedding chaos brings a new boy and numerous other complications into Cricket’s life in this funny and romantic novel from Printz Honor medal winner and National Book Award finalist Deb Caletti.

Cricket’s on a self-imposed break from her longtime boyfriend, but she’s picked a bad week to sort out her love life. For one thing, her mother’s romance is taking center stage?after jilting two previous fiancés, her mom is finally marrying Dan Jax, whom Cricket loves. And as wedding attendees arrive for a week of festivities at a guesthouse, Cricket discovers the guesthouse’s hippie owners have a sweet and sexy son?Ash?who Cricket can’t help being drawn to despite her current romantic predicament.

Meanwhile, complications abound: Cricket’s future stepsisters are busy making it clear they’re not happy about the marriage; an old friend decides this is the week to declare his love for Cricket; Grandpa reveals a big secret at a family gathering; and Dan’s ex-wife shows up. Even the dogs?Cricket’s old, ill Jupiter and Dan’s young, lively Cruiser?seem to be declaring war.

While Cricket fears that Dan is in danger of becoming ditched husband-to-be number three, she’s also alarmed by her own desires. Because even though her boyfriend looms large in her mind, Ash is right in front of her…