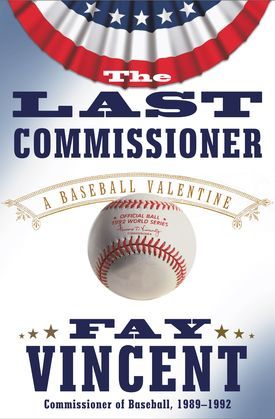 On a beautiful July morning in 1991, three men gathered in a hotel suite for an informal breakfast and conversation. The discussion ranged widely over events and characters of the past, famous names and fabled accomplishments flowing along with the coffee and juice. Two of them, Ted Williams and Joe DiMaggio, were the ultimate symbols of athletic glory for generations of American men. The third man, Fay Vincent, was living a dream, sitting with and asking questions of his boyhood heroes.

Fay Vincent never set out to be the commissioner of baseball. He got into the game alongside his good friend A. Bartlett Giamatti, as deputy commissioner, when Giamatti was named to the sport's highest office in 1989. They spent their first spring and summer dealing with Pete Rose's gambling, and Vincent's legal expertise complemented his friend's moral thunder. But that was to be their only season working side by side, as Bart Giamatti's heart gave out just days after the announcement of the Rose suspension. Vincent found himself the only logical candidate to fill a position as guardian of the best interests of the game he loves.

In The Last Commissioner: A Baseball Valentine, Vincent takes us along for the ultimate fan's fantasy camp. As commissioner, he got to talk baseball with the likes of Yogi Berra, Larry Doby, Warren Spahn, Ernie Banks, Eddie Lopat, Whitey Ford, and Henry Aaron. He brought his legal training to bear on the delicate issue of whether Roger Clemens uttered the magic word that would justify his being tossed out of a playoff game (and it's not the word you think). He was one of the few outsiders at the annual Hall of Fame banquet for the new inductees and their immortal peers, where he watched, amazed, as Johnny Mize demonstrated to Ralph Kiner his method of hitting an inside pitch -- a piece of advice from forty years past. And he brought equal respect and attention to the greats of the Negro Leagues, listening to the gracefully told stories of Joe Black and Buck O'Neil, slowly learning how Slick Surratt earned his nickname, hearing Jimmie Crutchfield give as good a definition of a well-lived life as we will ever know.

Vincent shares these stories and more: his high regard for umpires, instilled in his youth by his father, an NFL official and respected local ump; his close relations with the Bush family, forged in a summer spent working in the oil fields with his schoolmate Bucky Bush, the 41st president's brother (and 43rd president's uncle); his unusual experiences with the relentless George Steinbrenner, including the famous meeting where the Yankees owner was facing a two-year suspension and plea-bargained it down to a lifetime ban. Vincent also gives his candid views on the state of baseball today, firm in his belief that the game will survive its current leadership and even prosper.

Through it all, Vincent's deep love of baseball shines through. His most remarkable accomplishment as commissioner may have been to emerge from the office with his fandom intact. The Last Commissioner is truly a valentine to the game, written with the insight and vision that comes from the lofty perch of the ultimate front-row seat.