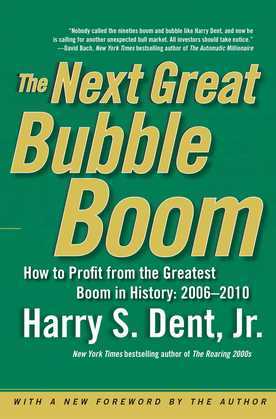 The Next Great Bubble Boom

For over fifteen years, New York Times bestselling author Harry S. Dent, Jr., has been uncannily accurate in predicting the financial future. In his three previous works, Dent predicted the financial recession of the early nineties, the economic expansion of the mid-nineties, and the financial free-for-all of 1998-2000.

The Next Great Bubble Boom -- part crystal ball, part financial planner -- offers a comprehensive forecast for the next two decades, showing new models for predicting the future behavior of the economy, inflation, large- and small-cap stocks, bonds, key sectors, and so on. In taking a look at past booms and busts, Dent compares our current state to that of the crash of 1920-21, and the years ahead of us to the Roaring Twenties. Dent gives advice on everything from investment strategies to real estate cycles, and shows not only how bright our future will be but how best to profit from it.

Dent gives us all something to look forward to, including:

Dent's amazing ability to track and forecast our financial future is renowned, and here he takes that ability to the next level, showing not only what our economy will look like but also how it will affect us as individuals, as organizations, and as a culture. From the upcoming wealth revolution to the essential principles of entrepreneurial success, the book describes a new society where economic and philanthropic development go hand in hand.

In The Next Great Bubble Boom, Dent shows not only how the economic growth of the late 1990s was a prelude to the true great boom right around the corner but how all of us can reap its benefits.