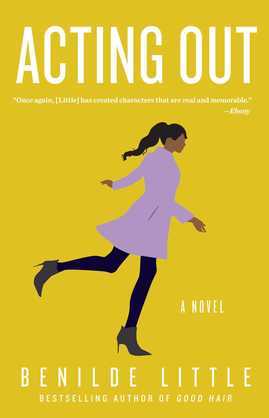 From the bestselling author of Good Hair and The Itch comes a novel about a modern woman living in -- and acting out -- her role as an upper-class African-American suburban wife.

Ina West is caught between the life she thought she was supposed to lead and the dreams she gave up long ago. Raised by loving but imperfect parents, Ina grew up a free spirit, getting a fine education and spending her twenty-something years as a photographer in Manhattan. But when family crisis and financial burdens came her way, Ina sought comfort in the arms of Jay Robinson, a hardworking businessman who occupied the safe, privileged world of the African-American upper middle class.

As Jay's wife, Ina has it all: the lavish home, the SUV, the soccer games...until one day Jay walks out of their marriage, leaving Ina with no one left to trust but herself. How she manages to raise three children, take up her old career, rekindle an old flame, and celebrate her newfound independence is what Acting Out is all about. By turns heartbreaking, uplifting, and wry, this novel will resonate for any woman who has struggled to find her path in life.!