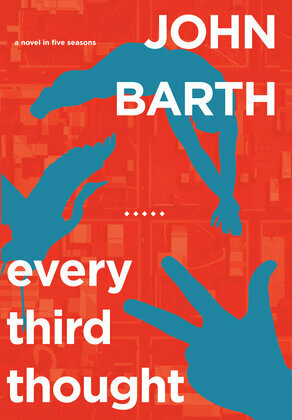 Every Third Thought: A Novel in Five Seasons

by John Barth (Author)
Fiction Literary English literature American and Canadian literature
EPUB
unlimited loans, One at a time
Details
John Barth stays true to form in Every Third Thought, written from the perspective of a character Barth introduced in his short story collection The Development. George I. Newett and his wife Amanda Todd lived in the gated community of Heron Bay Estates until its destruction by a fluke tornado. This event, Newett notes, occurred on the 77th anniversary of the 1929 stock market crash, a detail that would appear insignificant if it were not for several subsequent events. The stress of the tornado’s devastation prompts the Newett-Todds to depart on a European vacation, during which George suffers a fall on none other than his 77th birthday, the first day of autumn (or more cryptically, Fall). Following this coincidence, George experiences the first of what is to become five serial visions, each appearing to him on the first day of the ensuing seasons, and each corresponding to a pivotal event in that season of his life.

As the novel unfolds, so do these uncanny coincidences, and it is clear that, as ever, Barth possesses an unmatched talent in balancing his characteristic style and wit with vivid, page-turning storytelling.