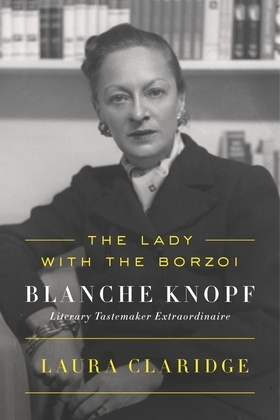 The Lady with the Borzoi

Left off her company?s fifth anniversary tribute but described by Thomas Mann as ?the soul of the firm,? Blanche Knopf began her career when she founded Alfred A. Knopf with her husband in 1915. With her finger on the pulse of a rapidly changing culture, Blanche quickly became a driving force behind the firm.

A conduit to the literature of Langston Hughes and the Harlem Renaissance, Blanche also legitimized the hard-boiled detective fiction of writers such as Dashiell Hammett, James M. Cain, and Raymond Chandler; signed and nurtured literary authors like Willa Cather, Elizabeth Bowen, and Muriel Spark; acquired momentous works of journalism by John Hersey and William Shirer; and introduced American readers to Albert Camus, André Gide, and Simone de Beauvoir, giving these French writers the benefit of her consummate editorial taste.

As Knopf celebrates its centennial, Laura Claridge looks back at the firm?s beginnings and the dynamic woman who helped to define American letters for the twentieth century. Drawing on a vast cache of papers, Claridge also captures Blanche?s ?witty, loyal, and amusing? personality, and her charged yet oddly loving relationship with her husband. An intimate and often surprising biography, The Lady with the Borzoi is the story of an ambitious, seductive, and impossibly hardworking woman who was determined not to be overlooked or easily categorized.