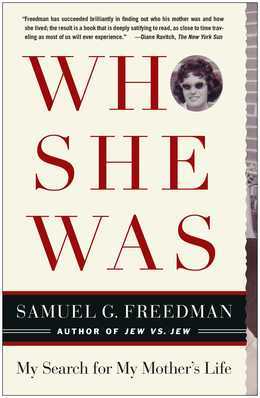 When Samuel G. Freedman was nearing fifty, the same age at which his mother died of breast cancer, he realized that he did not know who she was. Of course, he knew that Eleanor had been his mother, a mother he kept at an emotional distance both in life and after death. He had never thought about the entire life she lived before him, a life of her own dreams and disappointments. And now, that ignorance haunted him.
So Freedman set out to discover the past, and Who She Was is the story of what he found. It is the story of a young woman's ambitions and yearnings, of the struggles of her impoverished immigrant parents, and of the ravages of the Great Depression, World War II, and the Holocaust.
It is also the story of a middle-aged son wracked with regret over the disregard he had shown as a teenage boy for a terminally ill mother, and as an adult incapable for decades of visiting her grave. It is the story of how he healed that wound by asking all the questions he had not asked when his mother was alive.
Whom did she love? Who broke her heart? What lifted her spirits? What crushed her hopes? What did she long to become? And did she get to become that woman in her brief time on earth?
Who She Was brings a compassionate yet unflinching eye to the American Jewish experience. It recaptures the working-class borough of the Bronx with its tenements and pushcarts, its union halls and storefront synagogues and rooftop-tar beaches. It remembers a time when husbands searched hundreds of miles for steady work and wives sent packages and prayers to their European relatives in the desperate hope they might survive the Nazis. In such a world, Eleanor Hatkin came of age, striving for education, for love, for a way out.
Researched as a history, written like a novel, Who She Was stands in the tradition of such classics as Call It Sleep and The Assistant. In bringing to life his mother, Samuel G. Freedman has given all readers a memorable heroine.