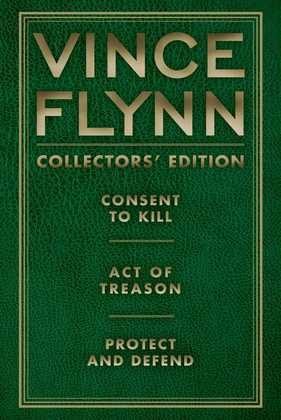 An eye for an eye: that's what the powerful father of a dead terrorist demands in retribution--and with his hate-filled plea, Mitch Rapp becomes the target of an explosive international conspiracy. The fearless operative has both killed with impunity and tortured to avert disaster, all in a battle to preserve freedom. But even among America's allies, some believe the time has come to bring Rapp down. Now the unter is the hunted, and Rapp must rely on his razor-sharp instincts for survival--and justice--as he unleashes his fury on those who have betrayed him.

In the final weeks of a fierce presidential campaign, a motorcade carrying candidate Josh Alexander is shattered by a car bomb. Soon after the attack, Alexander is carried to victory by a sympathy vote, but his assailants have not been found. When CIA director Irene Kennedy and Special Agent Skip McMahon receive damagin intelligence on Washington's most powerful players, they call on Mitch Rapp--the one man reckless enough to unravel a global network of contract killers on an explosive mission that leads back to the heart of our nation's capital...and the inner sanctum of the Oval Office.

No longer willing to wait for the international community to stop its neighboring enemy, Israel brings down Iran's billion-dollar nuclear program in an ingeniously conceived operation. The attack leaves a radioactive tomb and environmental disaster in its wake, and has Iranian president Amatullah calling for blood--American blood. Seeing opportunity where others fear reprisals, Mitch Rapp devises a brilliant plan to humiliate Iran's government and push the nation to the brink of revolution. But when a back-channel meeting between CIA director Irene Kennedy and her Iranian counterpart goes disastrously wrong, Rapp is locked in a showdown with a Hezbollah mastermind in league with Amatullah--and he is given twenty-four hours to do whatever it takes to stop unthinkable catastrophe.