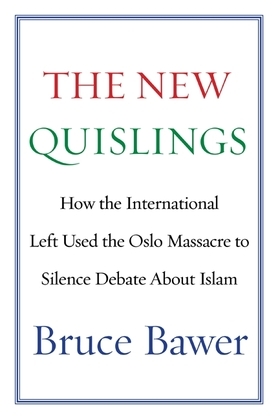 The New Quislings: How the International Left Used the Oslo Massacre to Silence Debate About Islam

Millions of people around the world were shocked and horrified when a madman named Anders Behring Breivik set off a bomb in downtown Oslo and then attacked a political summer camp on the island of Utoya, gunning down defenseless teenagers while calling out “Gotcha!” as though he were playing a video game. In the immediate aftermath of the attack, before the killer’s identity was known, some people leaped to the conclusion that this was yet another act of Islamic terrorism. When it turned out that the killer was a native Norwegian—the author of a rambling manifesto in which he described himself as a modern Knight Templar defending the values of Christian civilization—the left wing cultural elite in Europe and the US jumped to delegitimize critics of Islam by falsely and cynically linking them to Breivik.

One of those critics was American writer Bruce Bawer, author of numerous books about the threat of Islamic radicalism and one of those whose works were cited in Breivik’s manifesto. Bawer has lived in Oslo for many years and has written extensively on the challenges of immigration and the negative effects of radical Islam on liberal societies. He is also a vocal critic of the left wing cultural elite that seeks to minimize this threat and promotes instead a vision of a harmonious multicultural society based on tolerance and mutual respect. Unfortunately, such “tolerance” does not extend to critics of Islam or multiculturalism, who are routinely labeled nativists and fascists by members of the left wing elite.

The left typically denies or downplays the religious motives of Islamic terrorists while insisting that “right wing rhetoric” creates a “climate of hate” which necessarily leads to violence. Thus the multicultural left in Europe and the US strove to paint Breivik as a pro-Israel Christian terrorist whose insane actions were encouraged if not outright motivated by conservative authors who warn against the impending Islamization of Europe. Those who had criticized Islam, however legitimately concerned they might be with the denial of basic human rights and individual liberties within Muslim communities, were deemed officially anathema. They were Islamophobes—racists, bigots, extremists. They were the danger. They were the threat. They had fertilized the soil in which the mass murderer had grown. This campaign of vilification was waged not just in the European press but on American blogs and in the pages of the New York Times.

In The New Quislings, Bruce Bawer explores the world-wide response to Breivik’s rampage, from the Norwegian cultural elite to Atlantic blogger Andrew Sullivan and the New York Times’ Roger Cohen. He provides a fascinating portrait of the left-wing cultural elite in Norway—revealed to be the birthplace of political correctness—and shows how they have become apologists for radical Islam. Bawer further argues that they are the heirs of Vidkun Quisling, the Norwegian fascist who administered Norway under the heel of the Nazi regime. And he explains how those who oppose open debate and seek to control the conversation about Islam pose the greatest threat to liberal society.