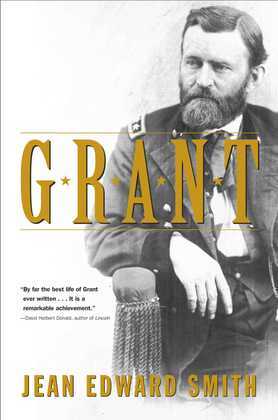 Ulysses S. Grant was the first four-star general in the history of the United States Army and the only president between Andrew Jackson and Woodrow Wilson to serve eight consecutive years in the White House. As general in chief, Grant revolutionized modern warfare. Rather than capture enemy territory or march on Southern cities, he concentrated on engaging and defeating the Confederate armies in the field, and he pursued that strategy relentlessly. As president, he brought stability to the country after years of war and upheaval. He tried to carry out the policies of Abraham Lincoln, the man he admired above all others, and to a considerable degree he succeeded. Yet today, Grant is remembered as a brilliant general but a failed president.
In this comprehensive biography, Jean Edward Smith reconciles these conflicting assessments of Grant's life. He argues convincingly that Grant is greatly underrated as a president. Following the turmoil of Andrew Johnson's administration, Grant guided the nation through the post- Civil War era, overseeing Reconstruction of the South and enforcing the freedoms of new African-American citizens. His presidential accomplishments were as considerable as his military victories, says Smith, for the same strength of character that made him successful on the battlefield also characterized his years in the White House.
Grant was the most unlikely of military heroes: a great soldier who disliked the army and longed for a civilian career. After graduating from West Point, he served with distinction in the Mexican War. Following the war he grew stale on frontier garrison postings, despaired for his absent wife and children, and began drinking heavily. He resigned from the army in 1854, failed at farming and other business endeavors, and was working as a clerk in the family leathergoods store when the Civil War began. Denied a place in the regular army, he was commissioned a colonel of volunteers and, as victory followed victory, moved steadily up the Union chain of command. Lincoln saw in Grant the general he had been looking for, and in the spring of 1864 the president brought him east to take command of all the Union armies.
Smith dispels the myth that Grant was a brutal general who willingly sacrificed his soldiers, pointing out that Grant's casualty ratio was consistently lower than Lee's. At the end of the war, Grant's generous terms to the Confederates at Appomattox foreshadowed his generosity to the South as president. But, as Smith notes, Grant also had his weaknesses. He was too trusting of his friends, some of whom schemed to profit through their association with him. Though Grant himself always acted honorably, his presidential administration was rocked by scandals.
"He was the steadfast center about and on which everything else turned," Philip Sheridan wrote, and others who served under Grant felt the same way. It was this aura of stability and integrity that allowed Grant as president to override a growing sectionalism and to navigate such national crises as the Panic of 1873 and the disputed Hayes-Tilden election of 1876.
At the end of his life, dying of cancer, Grant composed his memoirs, which are still regarded by historians as perhaps the finest military memoirs ever written. They sold phenomenally well, and Grant the failed businessman left his widow a fortune in royalties from sales of the book. His funeral procession through the streets of Manhattan closed the city, and behind his pallbearers, who included both Confederate and Union generals, marched thousands of veterans from both sides of the war.