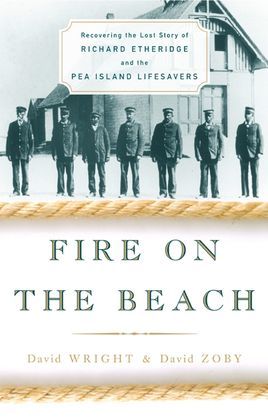 Fire on the Beach

FROM THE CIVIL WAR TO THE TURN OF THE CENTURY, THIS IS THE TRUE-LIFE STORY OF THE ORIGINAL COAST GUARD AND ONE CREW OF AFRICAN-AMERICAN HEROES WHO FOUGHT STORMS AND SAVED LIVES OFF NORTH CAROLINA'S OUTER BANKS.

Fire on the Beach recovers a lost gem of American history. It tells the story of the U.S. Life-Saving Service, formed in 1871 to assure the safe passage of American and international shipping and to save lives and salvage cargo. A century ago, the adventures of the now-forgotten "surfmen" who, in crews of seven, bore the brunt of this dangerous but vital duty filled the pages of popular reading material, from Harper's to the Baltimore Sun and New York Herald. Station 17, located on the desolate beaches of Pea Island, North Carolina, housed one such unit, and Richard Etheridge -- the only black man to lead a lifesaving crew -- was its captain.
A former slave and Civil War veteran, Etheridge recruited and trained a crew of African- Americans, forming the only all-black station in the nation. Although civilian attitudes toward Etheridge and his men ranged from curiosity to outrage, they figured among the most courageous surfmen in the service, performing many daring rescues. From 1880 to the closing of the station in 1947, the Pea Island crew saved scores of men, women, and children who, under other circumstances, would have considered the hands of those reaching out to help them to be of the wrong race. In 1896, when the three-masted schooner E. S. Newman beached during a hurricane, Etheridge and his men accomplished one of the most daring rescues in the annals of the Life-Saving Service. The violent conditions had rendered their equipment useless. Undaunted, the surfmen swam out to the wreck, making nine trips in all, and saved the entire crew. This incredible feat went unrecognized until 1996, when the Coast Guard posthumously awarded the crew the Gold Life-Saving Medal.
The authors depict the lives of Etheridge and his crew against the backdrop of late-nineteenth-century America -- the horrors of the Civil War, the hopefulness of Reconstruction, and the long slide toward Plessy v. Ferguson that followed. Full of exploits and heroics, Fire on the Beach, like the movie Glory, illustrates yet another example of the little-known but outstanding contributions of a remarkable group of African-Americans to our country's history.