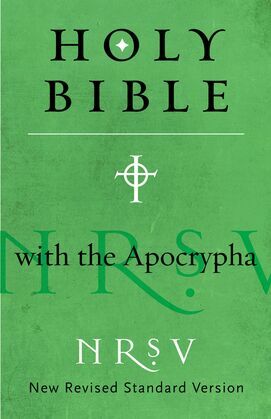 NRSV Bible with the Apocrypha

The New Revised Standard Version is the "standard" translation used by mainline Protestant churches, Orthodox churches, and by many Catholics. The NRSV debuted in 1989 and is owned by the National Council of Churches, which is the leading force for ecumenical cooperation among Christians in the United States representing thirty–five denominations with forty–five million members in more than 100,000 churches across the country. They have chosen HarperCollins to be the exclusive licensor of the translation for the world (nonexclusively in the UK).

The New Revised Standard Version is recognized in scholarly circles as the most accurate translation into English of the original Hebrew and Greek texts. In the tradition of its predecessors, the King James Version and the Revised Standard Version, the NRSV was designed to be the "standard" version for English–speaking people across all denominations, which in many ways it has become. None of the new, more sectarian translations have approached its standards of elegance and accuracy.

This unique one–column setting allows people to read the Bible as work of literature. Each book is introduced with an original wood–cut. Overall, this special easy–to–read setting makes the Bible a wonderful reading experience. It also includes a concordance index to help people find key passages.

This special Catholic edition includes all 23 books of the Catholic canon, a presentation page, and a ribbon.