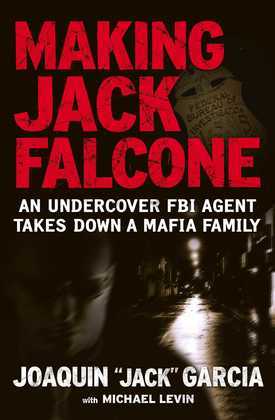 "Petey Chops wasn't kicking up. And if he didn't start soon, he was going to get whacked." So begins Making Jack Falcone, the extraordinary true story of an undercover FBI agent's years-long investigation of the Gambinos, which resulted in a string of arrests that crippled the organized crime family.

But long before Joaquin "Jack" Garcia found himself wearing a wire with some of the Mafia's top capos, he was one of the FBI's unlikeliest recruits. A Cuban-born American, Jack graduated from Quantico standing six-foot-four and weighing 300 pounds -- not your typical G-man. Jack's stature soon proved an asset as the FBI looked to place agents undercover with drug smugglers, counterfeiters, and even killers. Jack became one of the few FBI agents dedicated solely to undercover work.

Using a series of carefully created aliases, Jack insinuated himself in the criminal world, from the Badlands of Philadelphia, where he was a gregarious money launderer, to the streets of Miami, where an undercover Garcia moved stolen and illicit goods and brought down dirty cops. Jack jumped at the opportunity to infiltrate the shadowy world of La Cosa Nostra, but how would the Cuban-American convince wiseguys that he was one of their own, a Sicilian capable of "earning his button" -- getting made in the Mafia? For the first time, the FBI created a special "mob school" for Jack, teaching him how to eat, talk, and think like a wiseguy. And it wasn't long before the freshly minted Jack Falcone found himself under the wing of one of the Gambinos' old school capos, Greg DePalma. DePalma, who cared for an ailing John Gotti in prison, introduced Falcone to his world of shakedowns, beatings, and envelopes of cash, never suspecting that one of his trusted crew members was a federal agent.

A page-turning account of the struggle between law enforcement and organized crime that will rank with such classic stories as Donnie Brasco, Serpico, and Wiseguy, Making Jack Falcone is an unforgettable trip into America's underworld through the eyes of a highly decorated FBI veteran.