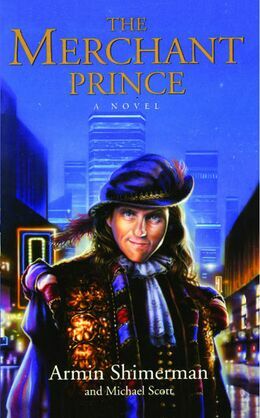 For seven years, Armin Shimerman played the diminutive entrepreneur Quark on Star Trek. Deep Space Nine®. Now, he teams up with author Michael Scott to chronicle the tale of a diminutive entrepreneur straight out of Earth history: Dr. John Dee.
Despite his lack of physical stature, the five-foot-tall Dee was a towering figure in Renaissance Europe: alchemist, necromancer, scientist, philosopher, adviser to royalty, enemy to the vicious de Medici clan -- and confidant of Dyckon, a member of the alien race known as the Roc.
Ancient and wise, the Roc have come to Earth to observe the evolution of humanity, not to interfere. But during the course of his studies, Dyckon has come to call John Dee friend. When the de Medicis arrest Dee in Venice, Dyckon chooses to save his friend from prison and leave him in suspended animation until the year 2099. The "philosopher of Albion" wakes in a confusing future where humanity is on the brink of developing the ultimate weapon -- a weapon that will mean the destruction of the human race!
The only thing that can prevent Armageddon in the future is a genius from the past -- but can even the great John Dee save humanity from itself?