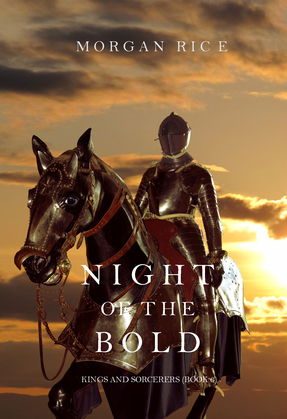 Night of the Bold (Kings and Sorcerers--Book 6)

"An action packed fantasy sure to please fans of Morgan Rice's previous novels, along with fans of works such as The Inheritance Cycle by Christopher Paolini.... Fans of Young Adult Fiction will devour this latest work by Rice and beg for more."
--The Wanderer, A Literary Journal (regarding Rise of the Dragons)

The #1 Bestselling series, with over 400 five star reviews on Amazon!

NIGHT OF THE BOLD is book #6--and the final installment--in Morgan Rice's bestselling epic fantasy series KINGS AND SORCERERS (which begins with RISE OF THE DRAGONS, a free download)!

In NIGHT OF THE BOLD, Kyra must find a way to free herself from Marda and return to Escalon with the Staff of Truth. If she does, awaiting her will be the most epic battle of her life, as she will need to face off against Ra's armies, a nation of trolls, and a flock of dragons. If her powers, and the weapon, are strong enough, her mother awaits her, ready to reveal the secrets of her destiny, and of her birth.

Duncan must make an epic stand against Ra's armies once and for all. Yet even as he fights the greatest battles of his life, leading to a final stand in The Devil's Gluch, he cannot expect the dark trickery that Ra has awaiting him.

In the Bay of Death, Merk and King Tarnis' daughter must join forces with Alec and the warriors of the Lost Isles to fight off the dragons. They must find Duncan and unite to save Escalon, yet Vesuvius has resurfaced, and they cannot anticipate the treachery awaiting them.

In the epic finale to Kings and Sorcerers, the most dramatic battles, weapons and sorcery all lead to a breathtaking, unexpected conclusion, filled with both heartbreaking tragedy and inspiring re-birth.

With its strong atmosphere and complex characters, NIGHT OF THE BOLD is a sweeping saga of knights and warriors, of kings and lords, of honor and valor, of magic, destiny, monsters and dragons. It is a story of love and broken hearts, of deception, ambition and betrayal. It is fantasy at its finest, inviting us into a world that will live with us forever, one that will appeal to all ages and genders.

"If you thought that there was no reason left for living after the end of the Sorcerer's Ring series, you were wrong. Morgan Rice has come up with what promises to be another brilliant series, immersing us in a fantasy of trolls and dragons, of valor, honor, courage, magic and faith in your destiny. Morgan has managed again to produce a strong set of characters that make us cheer for them on every page....Recommended for the permanent library of all readers that love a well-written fantasy."
--Books and Movie Reviews, Roberto Mattos (regarding Rise of the Dragons)