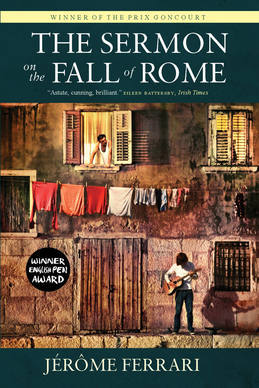 Sermon on the Fall of Rome

This sweeping generational novel, which spans the 20th century, begins with an old man considering a photograph of his long-dead siblings and mother. His bitterness about his family, with its absent father and far older brothers and sisters, is painful to him still.

Yet this familial bitterness pales when compared with his profound irritation at the recent disappearance of the highly skilled barmistress Hayet from his local bar. She was, after all, a woman who knew how to make a fine home away from home for her patrons--even for lonely ones like Marcel.

A succession of would-be barmen and hostesses descends on the Corsican bar in the hopes of taking Hayet's place, with disastrous and often hilarious results. But then Marcel's illegitimate grandson Matthieu and his streetwise best friend Libero return from the Parisian university where they had been studying philosophy and decide to have a go at running the bar themselves.

Initially the lifelong friends are a great success, but as reality increasingly intrudes on their idyll, they begin to see before their very eyes that St. Augustine's observation that all empires must inevitably crumble applies as much to village bars as it did to the ancient Romans.