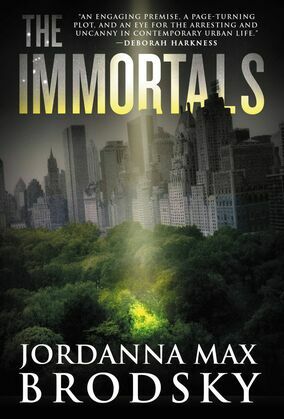 de Jordanna Max Brodsky (Auteur)
Fiction Fantasy Contemporain Historique Roman
One of The View's Summer Picks, 2017!
Manhattan has many secrets. Some are older than the city itself.

The city sleeps. Selene DiSilva walks her dog along the banks of the Hudson. She is alone -- just the way she likes it. She doesn't believe in friends, and she doesn't speak to her family. Most of them are simply too dangerous.

In the predawn calm, Selene finds the body of a young woman washed ashore, gruesomely mutilated and wreathed in laurel. Her ancient rage returns. And so does the memory of a promise she made long ago -- when her name was Artemis.

"The Immortals is a lively re-imagining of classical mythology with an engaging premise, a page-turning plot, and an eye for the arresting and uncanny in contemporary urban life."
--Deborah Harkness, New York Times bestselling author of A Discovery of Witches
Jordanna Max Brodsky's wide-acclaimed debut, The Immortals, sets Greek Gods against a modern Manhattan backdrop. Look out for her next novel, Winter of the Gods, in February 2017.